I was looking through some old photos and found some cute Christmas pics of our cats. Most of these pictures were taken in the 1990’s so they are rather dated but I couldn’t resist posting one or two.

The first one I found was of Zippy’s first Christmas. He looked at the gifts under the tree and miraculously, found his gift. It even had his name on it. Zip was a very smart cat. We called him a “fetch kitty” because when we threw a ball for him, he would retrieve it and bring it back to us. His favorite balls were aluminum foil balls that I rolled and rolled around in a spoon until it was completely smooth and rolled faster than the toy balls. He had about a dozen of these handmade balls. One by one, they would disappear. “Where’s your ball?” I would ask and he always led me to the same spot. The stove – where he reached and fussed until I removed the drawer and sure enough, we would find every one! Somehow, he kept track of his toys. So what does this have to do with the gift under the Christmas tree? He picked his out without disturbing the other gifts. Wonder if the catnip inside the toy gave it away? 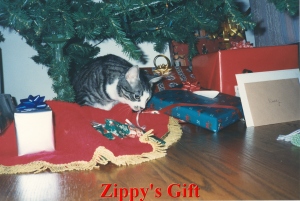 Some may think it is silly to buy a gift for a cat. After all, aren’t the boxes, paper, ribbon and gift bags enough to make the day special for a cat? (They certain love playing in the boxes and bags while ribbons are quickly hidden because they can pose a danger if fibers are swallowed.) However, Zip was part of our family and we loved him and wanted him to have something special under the tree too.

There are several spiritual applications running through my head but the Parable of the fatherhood keeps coming to mind.
“If ye then being evil know how to give good gifts unto your children; how much more shall your Heavenly Father give the Holy Spirit to them that ask them?” (Luke 11:13)

Lets think on the good gifts the our Heavenly Father has given us and the rest will be a bonus. Thank you, Lord for the gift of your Son!