The squeak of the back porch door and the sound of Papa and her two older brothers prompted Isabel to investigate.
“Isabel,” Mama scolded, “one of these days you are going to hurt yourself; jumping off the stool that way!”
“Yes, Mama.” Isabel smiled and slowly backed to the door and then ran the length of the back porch to hold the screen door.
Papa entered the back porch, stomped snow off his boots, and then made a show of wiping his feet on the braided rug before entering the kitchen door. “Temperature’s dropping awfully fast,” Papa said as he sauntered to the stove to warm his hands while Mama poured a cup of steaming coffee into a heavy mug and offered him a gingerbread cookie.
“Here’s your tree, little princess,” Papa teased as he pointed to a tiny tree before stepping aside to reveal a large pine.
“Oh, Papa it’s beautiful!” Isabel jumped and clapped her hands simultaneously.
“That is a lovely tree!” Mama reached over Isabel to open the door wider. “Let’s move out of the way, dear so that Papa and the boys can bring that lovely tree inside.”
Isabel skipped into the kitchen and moved her stool out of the way before running to Maggie.
“It’s here, it’s here Maggie. Wake up!”
Maggie sat up and rubbed her eyes. “The Christmas tree?”
“Yes!” Isabel sang, “The Christmas tree and we get to help decorate it!”
Both girls danced around the kitchen as Papa carefully carried the tree into the front parlor and placed it gently into the corner where it could be seen from the kitchen and through the windows.
“Now girls, don’t get too excited. We need to prepare supper and clean up the kitchen first. Besides, we haven’t finished stringing popcorn. We will work on that tonight and add a few of the decorations. Tomorrow we will wrap up cookies to give to our neighbors when we go Christmas caroling. How does that sound?”
“Fun!” Isabel and Maggie sang in unison.

After the dishes were done, the popcorn strung and handmade ornaments hung on the tree, Mama picked up the family Bible and the children gathered around her.

“Did you know that the people of Israel waited for the birth of Jesus – the “Messiah” for a very long time?”
“As long as we waited for baby Sylvie to come?” Maggie asked softly.
“Yes,” Mama said as she reached down and touched the child’s cheek. “They waited many years.
“That’s a long time!” Isabel exclaimed, walked closer to Mama and sat cross-legged on the floor.
“Almost since the beginning of time – since Adam and Eve disobeyed God in the Garden of Eden.”
“Did Abraham wait for Jesus to come?” Eugene asked as he folded a piece of paper to cut into the shape of a snowflake.”
“Yes, Abraham believed! God even showed Abraham that He what salvation is all about; He showed us what salvation is by promising Abraham a son and then as precious Isaac began to grow and learn how to be a man for God, he was used as an example of sacrifice.”
“God asked Abraham to take Isaac to the mountain, didn’t he Mama? Eugene said as he laid his craft aside and leaned on his elbows as Mama flipped the pages of the Bible to Genesis.
Papa turned from adding water to the bucket holding the tree, rubbed his chin and joined the conversation. “Abraham was a very old man when little Isaac was born, you know.”
“Older than you, Papa?” Curtis asked innocently.
“Oh, I guess Abraham was about fifty or sixty years older than me.”
“He was old!”
“Yep, he and Sarah both were much too old to have a child. That is part of the miracle – right Mama?” Papa tossed the question back at Mama who had found her place in Scripture.
“That’s right,” Mama smiled at Papa and then looked at the children. “Sarah was much older than me so don’t need to ask. She was even older than Gammy Isabella and Grandma Sarah Elizabeth too. Abraham was one hundred years old when Isaac was born and Sarah wasn’t much younger.”
The children quieted as Mama pulled the lamp closer to her chair and lifted the Bible.
“Genesis chapter 21 tells us about the birth of Isaac. It also tells about what happens when people try to take matters into their own hands to make things happen instead of waiting for God to answer but we will discuss that another time. Tonight, we are talking about the very long wait Abraham and Sarah had to wait for the son God had promised to them. Oh, they were so happy to hold that sweet baby in their arms! Every day he grew bigger and stronger making their parents proud to be chosen by God for such a blessing! They laughed as he smiled in his sleep, watched him try to fit his tiny fist in his mouth – just like you did when you were babies. 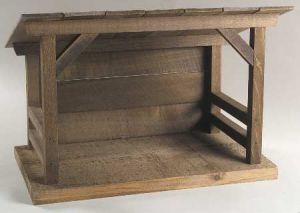 “Oh,” Isabel exclaimed, “is it a dollhouse?”
“Of course not, silly!” Eugene said with confidence. “It’s a stable!”
“That’s right, Eugene.” Mama smiled as she helped Papa lower the structure and placed it carefully under the tree. Next, he dug into the bag and pulled out some hay to lie on the floor of the stable. Next, he pulled out a box on legs and filled it with hay.
“What’s that?” Little Maggie asked and reached out to touch it gently.
“It’s a manger!” Curtis said. “You know – the bed for baby Jesus but it’s really a food box for the animals. Right, Papa?”
“That’s right, son,” Papa said as he stood and placed an arm around Mama. “Why don’t we sing just one Christmas carol before we turn in for the night? I’m afraid the chickens have beat us to bed tonight!
Mama picked up her squeeze box and played Joy to the World as the children and Papa sang along. Isabel looked once more at the stable with the empty manger.
“Papa, what about Baby Jesus? Doesn’t he sleep in the manger?”
“Well little Princess,” Papa said softly, “we have to wait.”