Isabel stood in awe at the large brick home with white pillars, shutters and trees in urns on either side of the door.

“Can you reach the doorbell, dear?” Mama asked and reached for the round knob beside the door and twisted until lovely music drifted from inside.

“That’s the doorbell, Isabel.” Mama said with a smile. “It rings inside the house to let them know we are here.”

Isabel felt butterflies as she waited. She heard quick footsteps and then the door was opened by a trim young woman in a black dress and white apron.

“Good afternoon,” she said as she presented a small silver tray. “Please come in. If you give me your card, Madame, I will let Mrs. Albright know you are here.”

“My card? I don’t have a card but Mrs. Albright is expecting us,” Mama said softly as her cheeks flamed red. Suddenly, a warm friendly voice drifted to the door. “Angela, please invite Mrs. Greene and the girls in. They don’t need a card; they are close friends.”

“Yes Ma’am,” Angela curtsied and opened the door and motioned for them to come inside.

“That will be all, Angela.” Mrs. Albright said as Sally Anne ran into the foyer to greet Isabel.

“I’m so sorry, Lizzy.” Mrs. Greene said as she ushered them into the parlor. “I should have told her you were coming. You know how society is today. If one doesn’t have a card, one isn’t invited in. A ridiculous tradition if you ask me.”

Mama smiled politely. “Your home is lovely, Lillian. Just the way I remember it from our childhood.”

Sally Anne ushered Isabel into a room with two tables draped in fine linen and china. One large table and one just the right size for little girls.

“Isabel, I’m so glad you came! This is my first tea party and you are my first guest!. We will have so much fun!  Mama and Cookie thought it was going to rain so they set the tables inside but now that the sun is out, the maids are moving everything outside. We may have our tea party in the flower garden!”

Isabel smiled and looked around. “There are pretty flowers everywhere.”

“You should see the treats Cookie made. Even the cake has flowers on it.” Sally Anne ushered Isabel into the kitchen but was shooed out.

“I’m sorry, Miss Sally Anne. You know your grandfather doesn’t want you to come into the kitchen and he is arriving this afternoon. If he sees you in here, I will lose my job for sure.” Mrs. Cook said as she lifted a pain of cookies out of the oven. “Why Miss. Isabel. You look so grown up today! I haven’t seen you since you were knee-high to a grasshopper! Miss Sally Anne, why don’t you show Miss Isabel your room while we finish the preparations?”

Isabel followed Sally Anne up a large, winding staircase. At the top of the stairs, Isabel looked down and felt a little dizzy until she focused on the beautifully carved banister. “Do you ever slide down the banister?”

“Yes,” Sally Anne whispered, “but only when Mother, Father and Grandfather are away and Cookie is busy in the kitchen. You’ll have to try it later when everyone it sometime,” she added with a smile.  She opened the first door on the right of the long hallway and invited Isabel in.

“Wow!” Isabel exclaimed as she looked around the room twice. “It looks like a toy store!” There were dolls of all shapes and sizes on a high shelf on one wall. A cradle contained toy animals of all sizes and her bed overflowed with both under a beautiful canopy. “It’s okay,” Sally Anne said as she looked out the large bay window. “Oh-oh, the other girls are coming in their fancy car. Father asked Mother to invite them. I just wanted you to come but he said that it would be good for business if Mother invited the mothers and daughters of his employees.”

Isabel didn’t know what an employee was but she could see the girls in fancy hats and dresses looking up at the window.” Sometimes they are nice,” Sally Anne said and then rolled her eyes. We won’t let them spoil our party will we Isabel?”

Isabel shook her head and followed down the flight of stairs and stood just to the side as Sally Anne greeted her other guests.

“Hello,” the girls acknowledged the introduction and then started chattering without including Isabel in the conversation.  Isabel looked across the hall into the parlor where Mama held baby Maggie as two other women gushed about Mrs. Albright’s outfit.

“Tea is served in the dining room,” the maid said as she led the girls and their mothers through French doors into a beautifully decorated room. “Ladies please be seated,” she indicated the large, beautifully decorated table and then directed the little girls to a smaller table set with a small tea set and dishes with a bowl of flowers in the center along with the petite tea set.

Each little girl gasped as they sat down at their table already occupied by toy bunny rabbits!

Sally Anne tiptoed to the large table against the wall laden with many treats. “Sally Anne, you should sit down with your guests now. Angela will serve you.

“Yes ma’am,” Sally Anne said softly. “May I serve the tea? Cookie showed me how.”

“No thank you,” Sally Anne said with a smile and ran back to the little table set just for her and her little friends.

After the girls were seated, with Sally Anne at the head of the table, Miss Angela rolled a tea cart to the small table. Sally Anne stood by the tea cart and asked Little Isabel to ask the blessing. After the prayer was said, Sally Anne became very prim and proper. She picked up the creamer and poured until each cup was more than half filled. Next, she laid a pretty strainer and poured the weak tea into each cup. She grasped the silver tongs and picked up a lump of sugar. “Do you want one lump or two?”

“One lump is quite enough Dear,” Mrs. Albright said and then turned back to Mama and the other ladies.

Isabel, Arlene and Mary Polly put their gloved hands over their mouth to stifle giggles as Sally Anne added to more lumps into each cup.

Each girl chose a sandwich in the shape of a heart and two cookies each. Isabel picked up the soft white napkin and placed it in her lap and then raised her tiny teaspoon with a floral design on the handle and gently stirred her tea; being careful not to spill it on the lovely tablecloth. The clink, clink, clink of spoons against china tea cups almost sounded like music to Isabel.

After the last sip of tea, the last treat eaten, and the giggling had ceased, Sally Anne stood and smiled at her friends.

“Thank you, Isabel, Arlene and Mary Polly for coming to my tea party! To thank you for coming, we have something special outside for everyone.

“Oh boy!” the girls said in unison as they slid their chairs back. Isabel squeezed the toy rabbit that had occupied the seat with her.

“Be sure to bring your rabbit,” Sally Anne said with a smile, “it’s for you! I have one for little Maggie too.” Sally Anne crossed the room with a small, soft rabbit and presented it to Maggie who was enjoying a cookie in a high chair near Mama.

Mrs. Albright placed her cloth napkin on the table. “Let’s all go into the garden,” she said with a smile.

There was a table outside by the hydrangea bush loaded with gifts. Each child had brought a birthday gift for their hostess, Sally Anne which were wrapped in pretty paper, tied with bright satin ribbons. There were also baskets filled with toys and six buckets containing carrots and a book.

“These are for you,” Sally Anne said. My favorite book is The Tale of Peter Rabbit and I thought you would like it too.”

“Are the carrots for feeding the toy rabbits?” Isabel asked softly.

Sally Anne smiled and pointed to the back of the lawn. “Father gave me a Peter Rabbit of my own. I thought we would have fun feeding him!”

Little Isabel smiled as she eyed the soft, brown bunny with a fluffy white tail. She watched her friend give the critter a carrot but what really had Isabel’s attention was the way his nose wiggled and twitched. Soon, all of the girls started laughing as Isabel tried to wiggle her nose and they all joined in.

Sally Anne returned Peter Rabbit to his cage and led her friends in a race to the gift table. The girls stopped suddenly and their eyes grew large at two pink cakes, each containing four candles. “I believe we have two birthday girls here today,” Mrs. Cookie said with a smile.

“That’s right,” Mrs. Albright said as she lit the candles. “Let’s all wish Sally Anne and Isabel a happy birthday!”

Isabel looked at the cake and then at Mama who urged her to blow the candles. “When I say, ‘go’ blow them out together,” Mama said. It was then Isabel saw two piles of birthday gifts.  Mama had each girl sit in a decorated chair to open their gifts before having a piece of cake.

The girls slowly opened the gifts, exclaiming over each one and all five girls were given a basket of gifts, including a tin of Beatrix Potter Tea, cookies, paper dolls, a large coloring book and crayons. Isabel’s favorite was the Peter Rabbit tea set from Sally Anne. 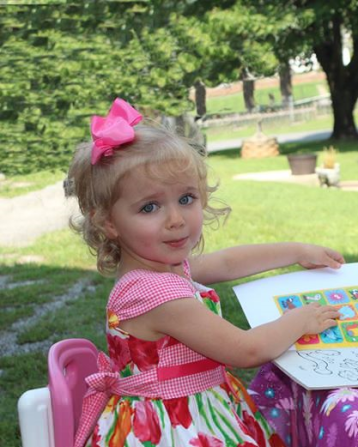