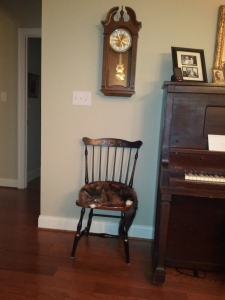 Poor Skippy. He couldn’t catch the pendulum of the clock so he gave up. At least until it chimes again! How often have we tried to stop time? God’s Word tells us to Redeem the time for the days are evil…

Only God can take a tiny, shy little girl and allow her to sing, teach, speak and write for Him!

This song has a lot of meaning for me. I was saved in October, 1968 after a revival in our little Church of the Brethren down the street. Well, actually, by my bed around one o’clock in the morning beside my bed. When I was a small child, my great Aunt Sylvia had taken me to Sunday School and Church with her every Sunday morning. A few years later, our family moved back into the neighborhood and I walked to Church.  As far as I can remember, I don’t remember hearing the Gospel before this. (Probably because I fell asleep with my head in Aunt Sylvie’s lap!). They were having an evangelist speak and I pestered Mom and my step Dad to come too. They did. Dad Hinchee asked the evangelist to come home with us. For the first time, I heard the Gospel clearly presented. I remember Dad Hinchee reading scripture as the evangelist requested. Ephesians 8-9.  “For by grace are ye saved through faith; and that not of yourselves; it is the gift of God: Not of works lest any man should boast.” Dad Hinchee openly wept and received Christ as his Savior. I was still mulling over Romans 3:23 – not wanting to admit that I am a sinner. Until that moment, everyone told me that I was “good” and I wanted to believe that. After a week under conviction, I could see Jesus dying on the cross for my sin. I got out of bed and on my knees received Christ as my Savior and my life was never the same again.

Once I was too shy to speak up, He gave me boldness to share what Christ had done for me.  A few days later, the Lord brought Roland Webb, a man who worked at the Norfolk & Western Railroad (now Norfolk Southern) into our lives. He had heard that we had been saved and asked if he could come to our house once a week to share the Word with us?

Mr. Webb had once been a choir director so he brought his songbook. After one song, he asked my parents if he could (unofficially) teach me to properly utilize the voice God had given me. His emphasis was on diction. I spent weekends with Roland and his wife, Bebe. For an hour each day, I had to stand in front of the mirror and practice – listening to George Beverly Shae recordings as an example. What a privilege!

We began attending the same Church as the Webbs and the Lord put me to work. There was a Youth Rally. The Youth Choir director called and asked if I was the little girl with glasses and a big voice? He asked me to sing a solo. Later, we were told there were over 400 in attendance. I could never have done this without the Lord. If you had asked my name, I would have hidden behind Mom. Now, I hide in Him and ask Him to sing, teach, or write through me.

Are you shy? Burdened? Overwhelmed? Do not be disheartened, for I have news for you: It is no secret what God can do what He has done for others, He will do for you!

Aunt Sylvia, the evangelist, Roland Webb all had redeemed the time by investing in sharing the Gospel with others as well as investing their time. I am so thankful they did!